Cooperation and Exchanges with the Philippines

Administrator Liu first of all welcomed the delegation and briefed on the organization structure and functions of the State Oceanic Administration. Liu said that since last year the State Oceanic Administration has adopted a series of countermeasures against the Philippines's attempt to detain Chinese fishermen near Huangyan Dao, the introduction of the Law of the Sea of Vietnam, and Japan's "nationalization" of Diaoyu Islands, so as to safeguard China's sovereignty and maritime interests. China will not make provocation on maritime issues. Whoever invades and challenges our maritime interest, however, China will never tolerate it or concede; instead, it will resolutely safeguard its sovereignty and maritime interests.

Liu emphasized that some harmonious elements came into being between China and the Philippines. The Philippines sent vessels to assault Chinese fishing boats and fishermen near Huangyan Dao last year, and has submitted the South China Sea Arbitration recently. The arbitration is an irresponsible provocative political action, which is clearly against the United Nations Convention on the Law of the Sea and Declaration on the Conduct of Parties in the South China Sea. It is doomed to failure and has adverse effect on the peace and development of the two countries.

Liu said that the FFCCCII has made a great contribution to the friendship between China and the Philippines, the peace and development and economic growth of the two countries. Chinese people feel deeply FFCCCII members' sincere love for their homeland and truly hope that the federation will play a more active role in promoting and strengthening cooperation between the two countries in maritime economy through complimentary advantages in traditional fishing and farming, coastal tourism, maritime biopharmacy, desalination and its application, maritime equipment manufacturing, and maritime new energy development, etc. We also hope that the FFCCCII will continue to contribute to the friendship of the two countries. We are willing to promote cooperation and exchanges with countries in the South China Sea in disaster prevention and mitigation, maritime monitoring and forecast, as well as ecological conservation, etc.

Lucio C. Tan and Tan Ching expressed their gratitude to the State Oceanic Administration for its hospitality, and said that the FFCCCII has done a lot for the two countries' friendship since its founding 60 years ago, and its members will continue to unite as one and gather Filipino Chinese to work for the friendship and common development of the two countries.

The delegation paid a visit to the Environmental Prediction Center of the State Oceanic Administration after the meeting.

(2) Administrator Liu Cigui Met with Undersecretary Manuel D. Gerochi of the Department of Environment and Natural Resources of the Philippines 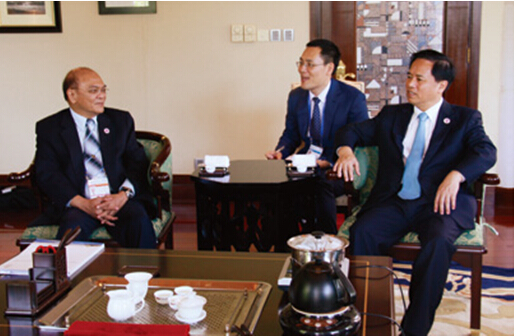 On August 27, 2014, Administrator Liu Cigui of the State Oceanic Administration had a meeting in Xiamen with Undersecretary Manuel D. Gerochi of the Department of Environment and Natural Resources of the Philippines, who attended the Fourth APEC Ocean-Related Ministerial Meeting.

Administrator Liu first of all sent welcome to Undersecretary Gerochi, saying that the Fourth APEC Ocean-Related Ministerial Meeting in Xiamen was an important component of APEC meetings and its achievements would be handed in to the APEC Economic Leaders' Meeting in November. As the host, China hoped that the two sides were to keep in good communication and coordination to ensure a success of the meeting. 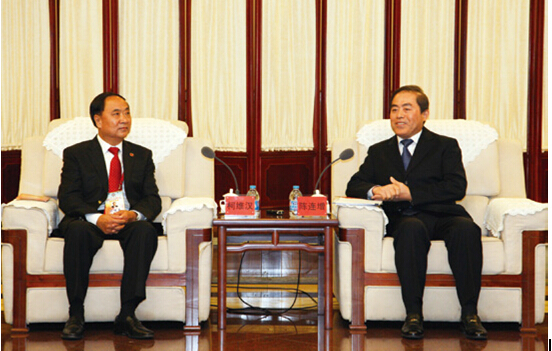 On October 17, 2014, Deputy Administrator Chen Lianzeng of the SOA met in Beijing with a delegation of the Federation of Filipino Chinese Alumni Association (FFCAA), led by its Chair Ke Weihan. Chen wished for a greater contribution by the FFCAA to maritime exchanges and cooperation between China and the Philippines.

On behalf of the SOA, Deputy Administrator Chen welcomed the delegation and briefed on its major functions. Chen said that ocean is a precious resource for human beings' living and sustainable development; therefore all countries have responsibilities and obligations to know about the ocean and protect it through joint development and conservation. The State Oceanic Administration issued the Framework Programme for International Cooperation in the South China Sea and its adjacent Waters in the year 2012. It also signed bilateral maritime cooperation documents with Indonesia, Thailand, Malaysia and other countries around the South China Sea, setting up a joint maritime research center and making good use of regional international platforms to push forward cooperation in maritime study, environmental protection, disaster prevention and mitigation, etc. What's more, it deepened cooperative ties with neighboring countries around the South China Sea via offering training programs for ocean-related ministers from developing countries and the Chinese Government Ocean Scholarship.

Chen said that the Federation has become an important social group in the Philippines as it plays a vital role in protecting the interests of Filipino Chinese, imparting traditional Chinese culture and promoting bilateral friendship. We sincerely hope that the Federation would contribute more to maritime exchanges and cooperation between the two countries.

Ke Weihan expressed his gratitude to the State Oceanic Administration for its hospitality and gave an introduction to the Federation saying that the FFCAA not only had taken an active part in public service and disaster relief in the Philippines but also formed groups to visit China and make donations for their alma maters. The FFCAA was ready to offer suggestions to Filipino ocean-related departments and scientists and to push forward bilateral maritime cooperation.

Experts from the State Oceanic Administration explained the origin of the South China Sea issue between China and the Philippines and stated China's stance on the resolution of territorial water issues. They also responded to questions raised by the delegation. 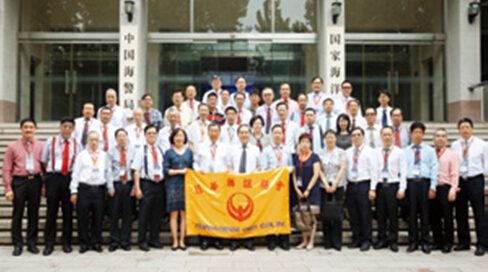 Deputy Administrator Chen Lianzeng of the State Oceanic Administration met in Beijing with a delegation of the Filipino Chinese AMITY Club, led by Mario Marria on July 30, 2015, and had a discussion with the delegation on the construction of Belt and Road Initiative as well as the promotion of China-Philippines relations.

On behalf of the SOA, Deputy Administrator Chen welcomed the delegation and gave a brief introduction of its major responsibilities. He said that President Xi Jinping proposed in 2013 the initiative of jointly building Silk Road Economic Belt and 21st-Century Maritime Silk Road, which had received a positive response from many countries. Guided by the principle of "amity, honesty, benefit, and inclusiveness", the State Oceanic Administration has made extraordinary achievements in maritime cooperation with neighboring countries. Chen said that since its founding 41 years ago, the Club had been playing an active role in imparting traditional Chinese culture and promoting China-Philippines relations. It was our hope that the Club would seize the opportunities offered by the Belt and Road Initiative and contribute more to the economic growth and social development of both countries through promoting bilateral exchanges and cooperation.

Mario Marria said that as overseas Chinese, they were very excited to witness China's prosperity and rapid economic growth in this visit. The purpose of the Filipino Chinese AMITY Club was to promote Philippines-China friendship and economic and cultural exchanges. The Club would continue to make good use of its advantages and participate in the Belt and Road Initiative and make more contribution to strengthening economic and cultural exchanges between the two countries.

Lou Chunhao, Vice President of Institute of Maritime Strategy, China Institutes of Contemporary International Relations was invited to deliver a report on the Belt and Road Initiative and its enlightenment about China-Philippines cooperation.