Cooperation and Exchanges with Vietnam

From March 1 to 3, 2010, a group from Vietnam Institute of Oceanography headed by Professor Vo Si Tuan, the vice president, paid a visit to the Second Institute of Oceanography, SOA. Scholars from both sides delivered reports and had a heated discussion on oceanic studies. The two bodies agreed on an initial plan for cooperation and signed a memorandum of understanding on China-Vietnam Maritime Cooperation, covering the following fields: the South China Sea maritime ecosystem and its impacts on global climate change; biogeochemical process of inshore coral reefs, sea grass beds, and mangrove; prevention and management of red tide, biological invasion and other maritime disasters; maritime conservation areas and ecosystem recovery; the South China Sea maritime biodiversity; toxins in oceanic organic matters; the South China Sea maritime geology, physical oceanography, and remote sensing, etc. Researchers of two organizations are encouraged to exchange visits. Besides, two research programs—"impacts of harmful algal blooms on climate change" and "a study on the biodiversity and biogeochemistry of China-Vietnam costal lagoons"—have been proposed to the Eighth Conference of China-Vietnam Joint Commission on Technological Cooperation. 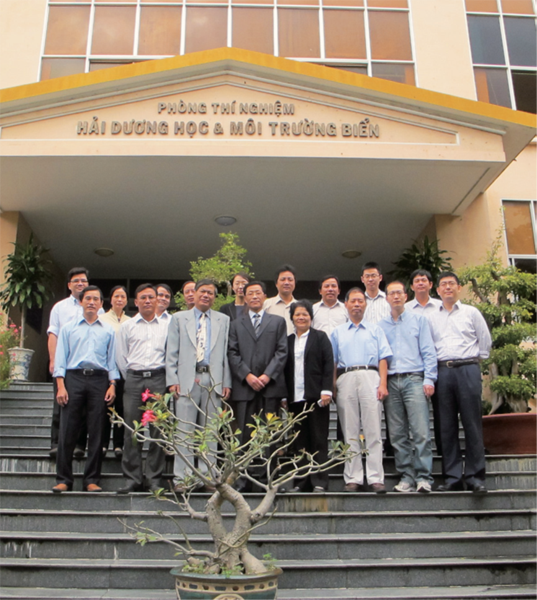 A group headed by Mr. Zhang Haisheng, president of the Second Institute of Oceanography visited Vietnam Institute of Oceanography from December 14 to 18, 2011. The 2nd China-Vietnam Oceanography Seminar was hosted during the visit with scholars having in-depth discussions. Both organizations believe that their cooperation can be furthered step by step to maritime biogeochemistry, molecular biology, physical oceanography, maritime remote sensing and other fields through exchanging scientists, co-hosting seminars, training and symposia, designing and running joint programs like joint scientific experiments and maritime research.

Expert working groups conducted the second round of negotiations on China-Vietnam low-sensitive maritime cooperation in Hanoi, the capital of Vietnam. The Chinese delegation was headed by Deputy Director General Yi Xianliang of the Department of Boundary and Ocean Affairs of the Ministry of Foreign Affairs and included officials from the State Oceanic Administration, the Maritime Safety Administration of the Ministry of Transport, and China Geological Survey. Headed by Le Quy Quynh, the Director General of the Department of Maritime Affairs of Foreign Ministry of Vietnam, the Vietnamese delegation included members from the Ministry of National Defense, the Ministry of Public Security, the Ministry Transport, the Ministry of Science and Technology, the Ministry of Environment and Resources, the Ministry of Rural Affairs, and the Institute of Geology. This was a follow-up to the first round of negotiations held in Beijing in May this year. Both delegations made detailed introduction to their intended cooperation programs. Vietnam proposed four programs including scientific research and environmental management of sea and islets around the Beibu Bay, and modern depositional environment around the Red River Delta, etc. The Chinese side proposed programs including ecological appraisal on Mekong and the surrounding waters, environmental forecast for maritime rescue in the South China Sea. The two sides also had discussion on principles, fields, contents and methods for cooperation, and mastered and agreed to hold their next negotiations in China in May or April 2013.

(4) A Breakthrough in China-Vietnam Maritime Cooperation: The Agreement on Joint Survey on Comprehensive Environmental Management of Waters and Islands in the Beibu Bay Was Signed and Witnessed by Chinese Premier and Vietnamese Prime Minister

On October 13, 2013, the Agreement Between the State Oceanic Administration of the People's Republic of China and the Ministry of Natural Resources and Environment of the Socialist Republic of Vietnam on Joint Survey on Comprehensive Environmental Management of Waters and Islands in the Beibu Bay (hereafter referred to as "Agreement") was signed and witnessed by Chinese Premier Li Keqiang and Vietnamese Prime Minister Nguyễn Tấn Dũng. Each side was represented respectively by Liu Zhenmin, Vice Minister of the Ministry of Foreign Affairs of China and Chu Pham Ngoc Hien, Vice Minister of Natural Resources and Environment of Vietnam.

The Agreement signed was based on the October 2011 Agreement on Basic Principles for Addressing Sino-Vietnam Maritime Issues. It's the first intergovernmental agreement on maritime cooperation in recent years between China and Vietnam, aiming to implement the joint declaration by the two governments made during the Chairman of Vietnam's visit to China in June 2013, to push forward friendly relationships between the two countries as well as their pragmatic maritime cooperation.

In the meeting with the Premier of Vietnam on October 13, Premier Li Keqiang pointed out that the Chinese side would like to advance cooperation with the Vietnam side for mutually beneficial results through three aspects: maritime cooperation, land cooperation, and financing cooperation. The signing of the Agreement is a demonstration of the two countries' determination to maintain stability, promote common development and achieve win-win results. The implementation of the Agreement means a kickoff of China-Vietnam cooperation in low-sensitive fields, which is conducive to the corporation and development in the South China Sea

According to Xinhua News agency, on December 6, 2013, a plenary session of China-Vietnam border limitation was held in Hanoi, the capital of Vietnam, by governmental delegations of China and Vietnam. The founding of a working group on consultations on China-Vietnam joint maritime exploitation was announced, aiming at pushing forward cross-border maritime cooperation between the two countries so as to safeguard peace and stability in the South China Sea.

Both delegations fully recognized the progress achieved in the past year by the Working Group on Joint Exploitation and Delimitation, the Expert Group on China-Vietnam Cooperation in Low-Sensitive Fields, and the Joint Committee of China-Vietnam Land Border. Besides, they have also made detailed plans for 2014. In order to realize the consensus made by leaders of the two countries this year, the two sides announced the founding of Working Group on Consultations on China-Vietnam Joint Maritime Exploitation. Heads of the two sides for the working group had their first meeting and agreed to convene the first conference of the working group in January 2014.

The two sides agreed to follow the important consensus reached by their leaders to advance the comprehensive strategic partnership, expanding cross-border maritime cooperation for the peace and stability in the South China Sea. They both believed that in order to maintain the momentum of the friendly bilateral relationship, high-level official exchanges shall be bolstered; cooperation in ocean, land and financing shall be attached with equal importance, while cooperation in the other fields shall be coordinated. What's more, cooperation in international and regional affairs shall be strengthened.

On October 13, 2013, witnessed by Chinese Premier Li Keqiang and Prime Minister Nguyễn Tấn Dũng of Vietnam, State Oceanic Administration, PRC and the Ministry of Natural Resources and Environment of Vietnam signed the Agreement on Joint Survey on Comprehensive Environmental Management of Waters and Islands in the Beibu Bay (hereafter referred to as "Agreement"). For the implementation of the agreement signed by the Chinese Premier and the Vietnamese Prime Minister, technicians were organized by the State Oceanic Administration to design implementation scheme, which passed technical reviews by the Ministry of Foreign Affairs and Ministry of Finance on December 30, 2013. To implement the Agreement and to improve bilateral communication on the projects, the fifth round of expert working group negotiations on China-Vietnam low-sensitive maritime cooperation was held in Hanoi, Vietnam by ministries of foreign affairs of the two countries. Its major task was to advance the concrete implementation of the project. Zhang Jiwei, a researcher from the Third Institute of Oceanography SOA, participated in the negotiations. Representatives of the State Oceanic Administration had a full discussion with experts from Vietnam Administration of Seas and Islands, the implementation unit for the project, over contents of the Agreement. The two sides reached consensus on the range of environmental and ecological data exchanges of the Beibu Bay, the nature and construction principles of a joint environmental management database, the location for the demonstration zone and the initial demonstration contents. In general, the Vietnamese side shared similar ideas with the Chinese side in survey contents and implementation methods of the project, while the database structure and demonstration contents required further discussion. The next meeting was to focus on the study of joint management mechanism of the Beibu Bay and the management mechanism suitable for the demonstration zone. Generally speaking, this meeting had laid a sound foundation for the project implementation.

Ambassador Qi said that leaders of both countries and both parties attached great importance to China-Vietnam maritime cooperation. In his visit to China in April this year at the invitation of CPC Secretary General Xi Jinping, CPV Secretary General Nguyễn Phú Trọng reached consensus with his Chinese counterpart to strengthen low-sensitive maritime cooperation via pushing forward expert working group negotiations. The two sides, guided directly by leaders of the two countries, had signed the Agreement on Joint Survey on Comprehensive Environmental Management of Waters and Islands in Beibu Bay, and A Comparative Research between the Changjiang River Delta and Red River Delta on Their Depositional Environment in the Holocene Epoch, and agreed to implement these agreements this year, sending positive signals of the strengthened maritime cooperation between the two countries. The Chinese side was willing to work with the Vietnamese side based on mutual respect and win-win principle to implement leaders' consensus, advance those projects and contribute to our bilateral ties.

Le Quy Quynh said, Secretary General Nguyễn Phú Trọng's successful visit to China had laid a sound foundation for China-Vietnam low-sensitive maritime cooperation. The Vietnamese side took this round of negotiations seriously and looked forward to its greater achievements, which might create conditions for the incoming eighth conference of Guiding Committee at Vice-Premier Level for China-Vietnam Cooperation. He added that the Vietnamese side would ensure the initiation this year of the project "Joint Research on Comprehensive Environmental management on Waters and Islands in the Beibu Bay" via closer communication with the finance authorities over the project fund.

Representatives of State Oceanic Administration of China and the Ministry of Resources and Environment of Vietnam exchanged views concerning details of the project like the management mechanism, funding, and types of data exchanges at a working conference. They also talked about hosting symposia and proposing new projects.

The Vietnamese set great store by this round of negotiations, sending high-level officials from multiple departments. Heads of both delegations repeated the positive attitudes of their governments toward maritime cooperation and stressed that related departments should strengthen dialogue and consultations for consensus on pragmatic maritime cooperation. They both believed that the two sides shall send positive signals of cooperation to the outside world so as to ease the intensity and maintain peace and stability of the South China Sea.

The Ministry of Natural Resources and Environment of Vietnam showed a proactive attitude in negotiations with its Chinese counterpart, and proposed that the two bodies shall establish a project management mechanism. The Vietnamese side had hopes and aspirations for the initiation of the project at an early date, as it suggested a seminar in China this year to focus on specific advice and arrangements for the project.