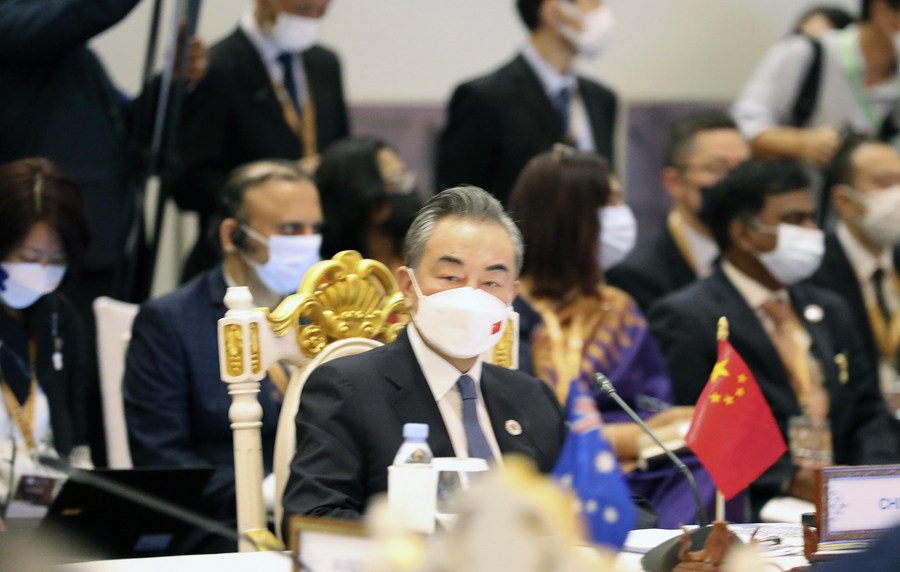 He made the remarks at the 12th East Asia Summit Foreign Ministers' Meeting in Phnom Penh, Cambodia.

China has never changed the basis and scope of its position which has seen no excessive claims, Wang said, noting that China and the member countries of the Association of Southeast Asian Nations (ASEAN) have been committed to properly handling their differences through bilateral consultation and negotiation based on the Declaration on the Conduct of Parties in the South China Sea (DOC).

Over the years, China and ASEAN countries have worked together to maintain the overall stability in the South China Sea, providing a stable environment for their development and prosperity, Wang said, pointing out that at present, the biggest risk to peace and stability in the South China Sea is the inappropriate intervention and frequent interference by major countries outside the region.

For a long time, the U.S. side had not raised any objections to China's sovereignty, rights and interests in the South China Sea, saying that it does not take a position on the sovereignty of the islands there, and now it has turned to total negation of China's position, Wang said, stressing it is baseless in terms of logic, law and justice.

What is the credibility of a major country if it changes its established policies so arbitrarily according to its own political needs? How can it win the trust of others in the future? Wang said.

In recent years, an increasing number of U.S. warships and aircraft have frequently headed to the South China Sea. China and other coastal countries couldn't help but wonder what on earth is the U.S. side intended to do? Wang added.

Countries outside the region should scrupulously abide by their duty and faithfully respect regional countries' efforts to safeguard peace and stability in the South China Sea, he said.

The Chinese side and ASEAN countries are now speeding up consultation on the Code of Conduct in the South China Sea, and will join forces to upgrade the DOC and set effective regional rules with practical significance, Wang added.