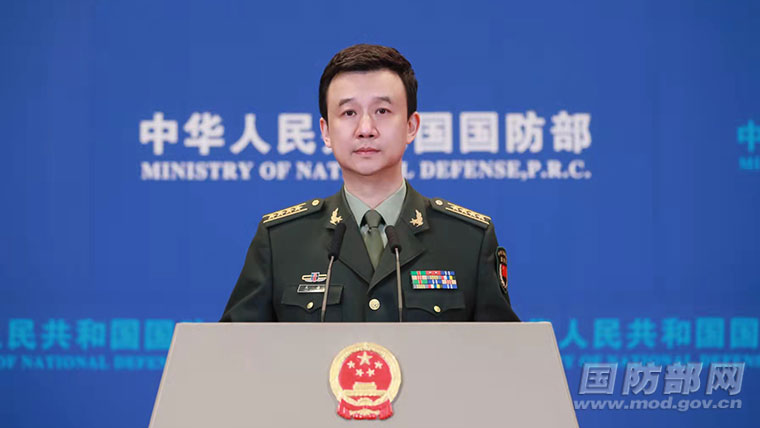 The United States is the biggest culprit behind the militarization of the South China Sea, and the "biggest disrupter and troublemaker" in the region, the Ministry of National Defense said on Thursday.

When commenting on US Admiral John Aquilino's claim that China poses a threat to regional countries, Senior Colonel Wu Qian, a spokesperson of the ministry, said China has indisputable sovereignty over the islands and adjacent waters in the South China Sea.

Therefore, it is within China's right as a sovereign nation to place necessary defense installations on its own territory, and as a response to provocations from the US, Wu said, adding the US has constantly dispatched warships and aircraft to the region to flex its muscle.

On March 18, during a video call between President Xi Jinping and US President Joe Biden, the US said it does not want to engage in a new Cold War with China, to change China's system, or to revitalize alliances against China, and that it does not support "Taiwan independence" or intend to seek a conflict with China, Wu said.

However, the recent actions by the US seemed to severely contradict these pledges, which the Chinese military adamantly opposes, Wu said.

"We hope the US can work with China, draw experience and wisdom from history, and promote China-US military-to-military relations and bilateral ties to return to a healthy and stable developmental track," he said.

In response to foreign speculations about China's defense budget, Wu said China upholds a national defense policy that is defensive in nature. "The growth of China's military power is the growth of the world's power for peace," he said.

On the other hand, he said, the US boasts the world's largest military budget. "In recent years, the US has blatantly disregarded the UN Charter and principles in international laws, and launched wars against Iraq, Afghanistan and other countries," Wu said.

"Facts have proved that the US is the culprit and mastermind for sabotaging world peace and stability."

In mid-March, US military officials reported that a Chinese J-20 fighter jet encountered a US F-35 fighter for the first time over the East China Sea. Wu said the Chinese military strongly opposes US military vessels and aircraft that have routinely carried out close-in reconnaissance on China, which has severely undermined mutual trust and safety of military personnel.

"It is the sacred duty of the People's Liberation Army Air Force to safeguard the security of China's territorial airspace," Wu said.