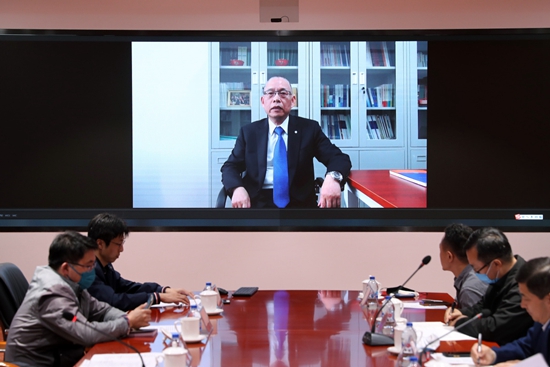 Jin speaks via video at a seminar titled "The Status Quo and Prospects of South China Sea Security" in Beijing on Oct 27. [Wang Zhuangfei/China Daily]

To maintain peace and stability on South China Sea is vital to building China into a maritime power, said Jin Yongming, professor of maritime law at the Ocean University of China. He said efforts should be made to ensure the security of the South China Sea and its surrounding areas.

Jin made the remarks via video at a seminar titled "The Status Quo and Prospects of South China Sea Security" held in Beijing on Oct 27. Hosted by China Daily Op-Ed department and China Daily website, the seminar was attended by experts and scholars from Chinese academies and universities.

Jin said the US has not only conducted so-called freedom of navigation operations itself, but also held joint patrols with other countries, even undertaking joint military exercises in the South China Sea. The US has not only deployed its own fleets to the South China Sea, but also adopted different models to promote, abet and collaborate with some of its allies in the building of their so-called maritime power and maritime capacity.