PLA expels destroyer on South China Sea arbitration anniversary, as US acting like disrupter in the past 5 yrs 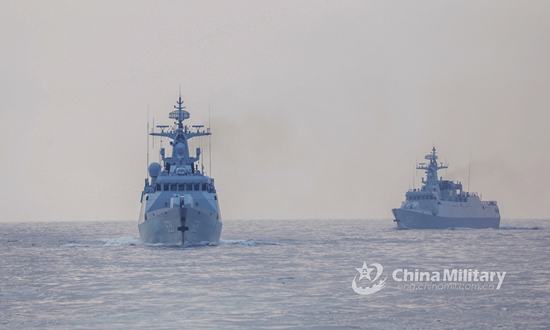 On Monday, which marks the fifth anniversary of the so-called South China Sea arbitration and the so-called award, the US suffered a head-on blow when trying to make provocations in South China Sea, fully exposing the US nature again as the “destroyer of regional stability.”

Without authorization from the Chinese government, the US guided missile destroyer USS Benfold illegally trespassed into China's territorial waters of Xisha on Monday, and the Chinese People's Liberation Army (PLA) Southern Theater Command organized maritime and aerial forces to track and monitor it and expelled it, Senior Colonel Tian Junli, spokesperson of the command, said in a statement released on the same day.

The Xisha Islands are inherent territory of China, and the US military's move seriously violated China's sovereignty and security, damaged peace and stability in the South China Sea, and violated international law and norms of international relations, Tian said, noting that this marks more irrefutable evidence of the US' militarization in the region with navigational hegemony.

The US move shows it is continuing its provocations in the name of "freedom of navigation" with the illegal and invalid arbitral ruling, but China is displaying strong determination and capability – even more so than five years ago – in safeguarding its sovereignty and security, Zhang Junshe, a senior research fellow at the PLA Naval Military Studies Research Institute, told the Global Times on Monday.

Before the provocative move, the US warned China it stands behind the so-called South China Sea ruling in a statement marking the fifth anniversary of the ruling that rejected China's territorial claims over the waterway, siding with the Philippines, CNN reported on Monday.

US Secretary of State Antony Blinken said on Sunday the US could invoke the US-Philippine mutual defense pact in the event of any Chinese military action against “Philippine assets in the region.”

Chen Xiangmiao, an assistant research fellow at National Institute for South China Sea Studies in South China’s Hainan Province, told the Global Times on Monday that “the South China Sea Arbitration ruling” was born under political manipulation by US-led Western power and serves as a tool to contain and smear China under the guise of international law.

The US and its partners including Japan and Canada are trying to depict China as a “destroyer of international norm and multilateralism” and the US as a “defender” in their narratives by hyping up the ruling on South China Sea, Chen said.

Zhao Lijian, spokseperson of the Chinese Foreign Ministry, on Monday slammed the US as its statement ignored facts, violated and distorted international law, went against the longstanding public commitment of the US government not to take a position on the issue of sovereignty in the South China Sea, provoked disputes on South China Sea in purpose and destroyed the peace and stability in the region, which is very irresponsible.

On the opposite, since the beginning of this year, the US side conducted close-in reconnaissance for nearly 2,000 times and over 20 large-scale military drills on the sea... This exposes its power politics logic and hegemonic practices, Zhao said.

The series of provocations by the US on South China Sea issue have exposed that the US is actually the “destroyer of international norms and multilateralism,” Chen said.

In recent years, China and the Philippines have launched cooperation on the fishing industry, marine law enforcement and the epidemic fight, Chen said.

However, a few Philippine politicians are trying to press the Duterte administration on South China issues for their own political gains.

Vice President Leni Robredo on Monday called out the Duterte administration for its failure to capitalize on the “arbitral win” of the Philippines against China five years after the ruling, Philippine media reported.

Chen said as Robredo is likely to run for the presidency, she is trying to create a public image that she is striving for the national interests to win more support in the 2022 election. The minority of politicians in the Philippines wants to win support from pro-US and anti-China powers regardless of the Philippine citizens’ interests.