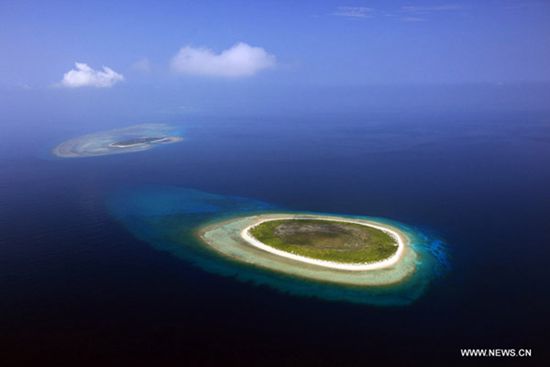 A recent article published by Philippine Daily Inquirer by the retired Philippine Supreme Court Justice Antonio T. Carpio sought to support Philippine sovereignty over the Spratly Islands in the South China Sea by claiming that the country had the "oldest documentary evidence". However, a review of history shows that the Philippines has no historical basis for its claim to the Spratly Islands, by contrast, sufficient historical records and archeological evidence consolidate the basis of China's sovereignty to features in the South China Sea.

The territorial formation of the Philippines can be traced back to the 16th century when Spain began to colonize the islands in 1565, with Miguel López de Legazpi establishing the first permanent Spanish settlement in Cebu. Up to 1898, when the proclamation of a republic marked the Filipinos as the first Asian people to try to throw off European colonial rule, the Philippine Archipelago was incorporated into the so-called Spanish colonial empire.

For over three hundred years, the policy of the Spanish colonial administration was more economic than political, designed to exploit the region's rich natural resources. As such, the colonial administration of the Philippines, like that of Spanish colonies in Latin America, aimed at supporting the mother state with wealth from colonies through conquest, commerce and trade. In the Philippine Archipelago, the Manila-based Spanish colonial government took complete control of all affairs relating to economic life, in order to secure a perfect monopoly of trade and commerce. It exploited the fertile soil for commercial agricultural products such as tobacco and coffee and implemented a system of oppressive taxation to raise revenue.

Therefore, all the colonial laws and regulations were made to control trade, commerce, agriculture, finance, taxation, the foundation of municipalities, the management of the natives, the control of mines, etc. By contrast, the Spanish in the Philippines did not achieve much progress concerning political affairs, creating a loose colonial administration instead of a strong centralized government.

Within such a regime, the Spanish did not have a clear and precise understanding of the size and border of their colonial territory. Regarding the features in the South China Sea including the Scarborough Shoal and Spratly Islands, no convincing documents have proved the Spanish seized them. There are at least two reasons for explanation.

First, a strong focus on economic benefits meant that the Spanish colonial government had no interest in offshore islands which were uninhabited and of no economic importance. Second, the establishment of a central authority in the colonies was a burden on Spain. It was thus impossible for the Spanish to waste limited resources to seize and occupy islands in the South China Sea.

That's also why when the US and Spain concluded their treaty in 1898, the officials of US government held different opinions concerning the territories for cession since even the Spanish themselves did not have a comprehensive understanding of the size of their colony.

The 1734 Murillo Velarde map is unacceptable as uncorroborated evidence

The 1734 Murillo Velarde Map (also known as Carta Hydrographica Y Chorographica de las Yslas Filipinas) has been used by the Philippine government on various occasions as a historical evidence to support its claim to Scarborough shoal. Based on details on the map, the Philippine government deems that the shoal named Panacot (or Masinloc on other maps) lying to the west coast of Luzon Island is Scarborough Shoal.

Such an assertion has already been criticized and corrected by academia. This is not only because there are very few ancient maps supporting this conclusion, but because plenty more maps since the late 18th century clearly indicate that Scarborough Shoal is not Panacot.

Panacot and two shoals appear for the first time on a map in 1590, when the Portuguese cartographer Bartolomeu Lasso made a chart of the coastal seas of South and Southeast Asia. He drew a group of three shoals to the west coast of Luzon Island, as his contemporary navigators thought that this region was dangerous for navigation.

From the eighteenth century onwards, the British and Spanish conducted several surveys in these waters and confirmed that the three shoals did not exist in reality. They eventually discovered the real Scarborough Shoal and confirmed its true geographical position. Such a geographical discovery proves that Panocat is not Scarborough Shoal and the 1734 map is not reliable.

The progress of surveys was reflected by numerous maps published in the late 18th and 19th centuries. For instance, in 1775, the French navigator Jean Baptist Nicholas D. de Mannevillette published his Neptune Oreintal (Second Edition) in Paris, in which A Chart of the China Sea originally drawn by British cartographer Alexander Dalrymple was included. On the chart, the "Scarboro" was for the first time marked to the west of the group of three shoals. The co-appearance of Scarborough and Panocot again disproves the Philippine assertion that Scarborough Shoal is Panocot and historically belongs to the Philippines.

A part of the A Chart of the China Sea shows the co-existence of the Scarborough Shoal and the group of three shoals to the west coast of Luzon Island. 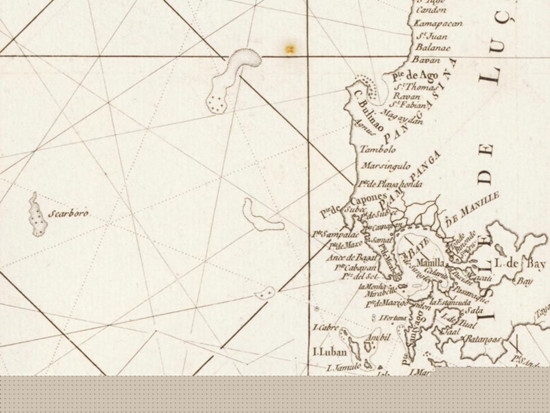 A part of the A Chart of the China Sea shows the co-existence of the Scarborough Shoal and the group of three shoals to the west coast of Luzon Island.

Scarborough Shoal lies around 230 kilometers to the west of coast of Luzon Island. The Spanish did not know its precise position until the late 18th century. Considering they were of no economic importance and were uninhabitable, the Spanish colonial government had no reason to incorporate it and Spratly Islands into its colonial territory. This explains why the 1898 Treaty of Paris and 1900 Treaty of Washington between Spain and the United States have no words on Scarborough Shoal or the Spratly Islands.

Justice Carpio and many other Philippine officials have frequently quoted the Treaty of Washington which states that "any islands belonging to the Philippine archipelago, lying outside the lines…as if they had been expressly included within those lines", as a historical evidence to claim the Scarborough Shoal and Spratly Islands which lie beyond the lines defined by the Treaty of Paris. It is necessary to point out that the Philippine quotation is incomplete. The following sentence "and particularly to the islands of Cagayan, Sulu and Sibutu and their dependencies" provides additional information explaining which islands lie outside the lines belonged to the Philippine Archipelago. It is thus evident that the Scarborough Shoal and Spratly Islands were not part of the territory ceded to the US, because they had been never part of Spanish colonial empire as discussed above.

That is also why when the French illegally occupied nine islands in the South China Sea in 1933, the Philippine ex-Senator Isabelo de los Reyes noticed and wrote a letter to the Governor General William Francis Murphy to take measures to claim the islands. The letter was forwarded to the War Department which held a cautious attitude as the US thought there was no basis for such a claim.

Contrary to the fake and weak historical evidence supporting the Philippines' claim to Scarborough Shoal and Spratly Island, China has plenty of historical documentary and archaeological evidence to confirm China's historical authority over these islands.

First, Chinese official and private historical records, document, maps, charts and other types of evidence show Chinese expeditions in the South China Sea as early as the Han Dynasty (206 BC - 220 AD). These historical sources, such as Yi Wu Zhi (Records of Rarities), Chufan Chi, and the official chronicles of each dynasty, also record Chinese activities in the South China Sea, including the naming the features, navigation and commerce in the sea, jurisdiction over the islands, etc.

In the 20th century, the Republic of China government entrusted administration of the South China Sea to the local government in Hainan, which was a special prefecture within Guangdong Province until April 1988 when it was "upgraded" to the status of a province. The Republic of China continued to exercise authority over the South China Sea islands through such means as granting licenses or contracts to private Chinese merchants for the development and exploitation of guano and other natural resources on the islands in the South China Sea. Official and non-official maps published in the Republic era invariably include the Spratly Islands as Chinese territory.

Third, folk literature, such as Geng Lu Bu (manual of sea routes created by Chinese fishermen) record navigation and fishery activities by Chinese people dating back 600 years. These people sailed to and through the Spratly Islands smoothly, gave names to the features according to their common knowledge, and fished in the region. All these indicate their acquaintance with the Spratly Islands, which could not be obtained without lasting and consistent practice.

Fifth, China's sailing, exploration, and exploitation experience in the South China Sea is richly recorded in the historical sources of various Western countries, including the archives of colonial governments and trading companies to personal records such as travel accounts, navigation logs, etc. For instance, in the 17th and 18th centuries, European commercial companies relied on Chinese traditional sailing routes and trading networks when navigating the waters and conducting commerce in Asia. John Crawfurd, a Scottish colonial administrator and diplomat in the 1830s observed Chinese mariners sailing through the South China Sea to Batavia (now Jakarta), indicating the Spratly Islands was historically known to Chinese mariners.

The continua Chinese activities since ancient times have confirmed China's consistent administration and exploitation of the South China Sea resources. Such historical-truth based practice by Chinese government and people became the historical basis for the nine-dashed line, which legally sets forth China's historic title over the South China Sea. Such solid historical foundation cannot be eroded and shaken by the historical fictions of people like Justice Carpio.

The author is a postdoctoral researcher at National Institute of South China Sea Studies.