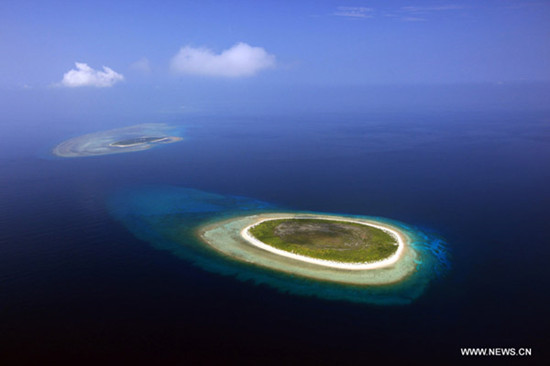 The United States is planning to conduct more intensive military maneuvers in the South China Sea either alone or in collaboration with its regional allies. Either way, it is a dangerous signal that the world's sole superpower should avoid sending as it is increasingly turning the waters into a regional flashpoint.

The US already conducts frequent naval exercises in the waters. On April 7, the USS Theodore Roosevelt aircraft carrier and its strike group concluded what Washington called "routine operations" and exercises in the South China Sea, its third entry into the waters this year.

The US aircraft carrier's frequent presence in the South China Sea has posed the biggest threat to peace and stability in the waters, not to mention that the US is obviously attempting to meddle in the region's maritime disputes.

The US obviously views the spat between the Philippines and China over some Chinese fishing boats sheltering around Niu'e Reef in the South China Sea last month as an opportunity to flex its muscles in the South China Sea again, and hopes to use it as a steppingstone to advance its own strategic interests in the region.

It is now crystal clear that the South China Sea has become the key venue for the US to cement its dominant position in the Indo-Pacific region and exert strategic pressure on China. That explains why the US Navy has frequently sent its warships into the waters under the pretext of freedom of navigation or held joint military exercises with regional allies in total disregard of the sovereignty and security of countries littoral to the waters.

Hence, it is no exaggeration to say that the US is now the root cause of the militarizing of the South China Sea. Yet the US troublemaking is doomed to failure as China and the Southeast Asian countries remain adamant in their efforts to prevent the South China Sea from becoming a crucible for conflict.

This year marks the 30th anniversary of the founding of dialogue relations between China and the Association of Southeast Asian Nations, which have witnessed long-term growth, and display great vitality and huge potential. Nothing can shake their shared resolve to build lasting peace and stability in the South China Sea and deepen their reciprocal cooperation in an all-around way. The US is whistling in the wind if it thinks its allies will oppose China's rise of which they are beneficiaries.