US meddling in South China Sea to no avail: China Daily editorial 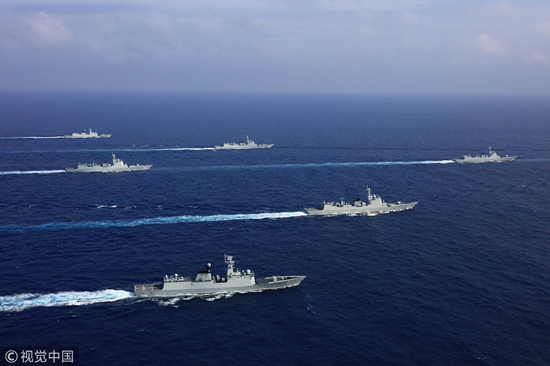 In a bid to contain China's peaceful rise, the United States has made the South China Sea a major venue for maintaining high strategic pressure on China in recent years, and for this purpose, the US Navy has increased the frequency with which its warships sail to China's doorstep.

Last week, it was the turn of the littoral combat ship USS Gabrielle Giffords and the guided-missile destroyer USS Wayne E. Meyer to conduct the provocation, with the former trespassing into the sea area adjacent to the Nansha Islands and the latter into the territorial waters of the Xisha Islands.

In response to the provocative moves, which were made just a few days after China called on the US to stop flexing its muscles in the waters, the Southern Theater Command of the People's Liberation Army immediately mobilized air and maritime forces to identify and warn the US ships to leave the waters.

In an online statement issued by the spokesman of the theater command on Friday, Senior Colonel Li Huamin urged the US to stop such dangerous provocations to avoid any unforeseeable accidents.

The frequent presence of US warships in the South China Sea heightens the risks of miscalculations or even a head-on conflict between the two navies. With the US Navy heightening its so-called freedom of navigation operations in the waters, the PLA has to enhance its countermeasures too.

While China respects and safeguards all countries' freedom of navigation and overflight in the South China Sea according to international law, it resolutely opposes the behavior of any country trying to undermine China's sovereignty and security under the pretext of such freedom.

The US should never underestimate China's resolution and ability to defend its territorial integrity and sovereignty. No matter how many times the US sends its warships to these sensitive waters, it will not change China's sovereignty.

By sending its warships to the South China Sea, the US may also want to continue to stoke regional maritime disputes. But this, too, is doomed to failure as its ill intention runs counter to the prevailing trend in the region, with all the parties directly concerned focusing on dialogue and cooperation.

In the face of the US' strategic pressure, China has no choice but to quicken its steps in building a blue-water navy and strengthening its overall defense capabilities. It is to be hoped that sooner rather than later, Washington will realize how counterproductive and futile its strategy is.