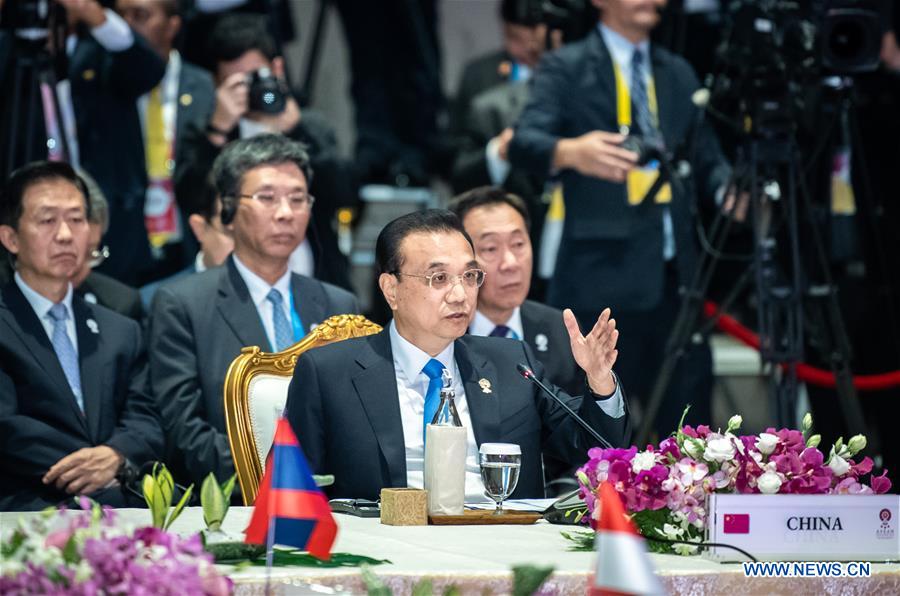 Since China and ASEAN established dialogue relations, they have brought benefits to each other and the wider region, Li said, adding that China always supports ASEAN's central role in East Asian cooperation.

The premier said China and ASEAN countries should stick to the principle of shared benefits and win-win outcomes, and speed up the work to upgrade economic and trade cooperation.

He called for an early conclusion of the negotiations on the Regional Comprehensive Economic Partnership (RCEP) so as to lay the foundation for East Asia's economic integration, and the implementation of the China-ASEAN Free Trade Area Upgrade Protocol to promote trade and investment liberalization and facilitation.

Li said China and ASEAN countries should enhance strategic mutual trust and safeguard peace and stability in the region.

Li said he hopes all sides will actively carry forward the consultations according to the previously agreed timetable, meet each other halfway, and safeguard peace and stability in the South China Sea.

The premier also said China and ASEAN countries need to carry forward their friendship from generation to generation, and stay ready to enhance people-to-people and cultural exchanges in such areas as media, health, education and tourism.

China is willing to train 1,000 administrative health staff and technical professionals in the following three years for ASEAN and will support projects such as the China-ASEAN Young Leaders Scholarship, said the premier.

Stressing that China will unswervingly pursue the path of peaceful development and an opening-up strategy of mutual benefit, Li said China is willing to synergize the Belt and Road Initiative with the development strategies of ASEAN as a whole and its members as well.

He urged to accelerate the construction of the existing economic corridors, promote infrastructure connectivity cooperation, as well as support the building of the Brunei Darussalam Indonesia Malaysia Philippines East ASEAN Growth Area.

Li encouraged innovation cooperation in the areas including digital economy, artificial intelligence, big data and cyber security, and the establishment of a China-ASEAN partnership on blue economy to enhance maritime exchanges and cooperation.

At the meeting, ASEAN leaders expressed congratulations on the 70th anniversary of the founding of the People's Republic of China, saying that the ASEAN-China partnership is the most dynamic one in all the partnerships ASEAN has forged.

Speaking highly of the new cooperation progress over the past year, the leaders said their countries would like to take an active role in building the Belt and Road, expand cooperation in areas of inter-connectivity, science and technology innovation, e-commerce, smart cities and blue economy, and increase two-way investment.

They also expressed the hope that the ASEAN-China trade volume can exceed 1 trillion U.S. dollars at an early date.

The leaders also applauded the new progress made in the COC negotiation, saying that their countries would like to maintain the momentum and advance the process.

During the meeting, China and ASEAN agreed to make an action plan to implement The Joint Declaration on China-ASEAN Strategic Partnership for Peace and Prosperity (2021-2025), issued statements on the Belt and Road Initiative, smart cities and media exchanges, and announced that the year 2020 will be the year of China-ASEAN digital economy cooperation.

Li arrived in Bangkok late on Saturday for an official visit to Thailand and a series of events including the 22nd China-ASEAN (10+1) leaders' meeting, the 22nd ASEAN-China, Japan and South Korea (10+3) leaders' meeting, and the 14th East Asia Summit.