Ming-Dynasty Navigation Map for the Eastern and Western Oceans (aka. Selden Map) is a color navigation map drawn during the Ming Dynasty (1610-1620) for the Eastern and Western oceans. Originally in the private collection of the British lawyer John Selden (1584-1654), it was donated in 1659 to the Bodleian Library, University of Oxford, and became known as the "Selden Map." In the map, two navigating routes were marked in black lines, one from Fujian to Ryukyu and Japan, and the other extending southward to Southeast Asia from the South China Sea. Compass needle positions annotated along the routes were reflective of the Chinese people's knowledge about Nanhai Zhudao. In the map, Dongsha Qundao were depicted as sand reefs pointing northeast, with a circled annotation reading "Nan'aoqi"; Xisha Qundao was depicted as a long stretch of sand extending southeastward, with the northern section painted red and a circled note reading "Wanli Shitang", to the upper right hand of which there was a further note "the islands are red"; in addition, a sail was painted waving from the northeast to the southwest, with a note saying "sample sail for ships sailing across Wanli Changsha." Those indicate that the Chinese had in the early seventeenth century mastered the South China Sea routes, the choice of sails for navigation there, and the locations of Dongsha Qundao and Xisha Qundao. 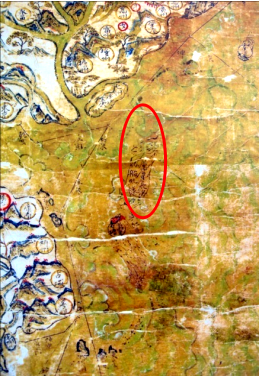 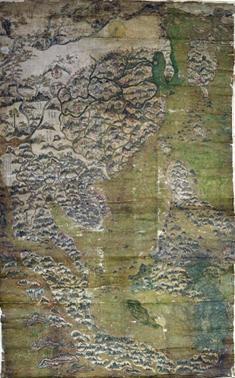