The names of Nanhai Zhudao were further clarified in the record of the Ming Dynasty. In Hai Yu written by Huang Zhong, Co-Minister of Defense during the Jiajing years (AD 1507-1566), it is said that, "Wanli Shitang is situated to the east of Wuzu and Duzhu Ocean, with a bleak sight and chilly gust unfound in the human world. Rich in Tridacninae resources, it is haunted with nine-, four- and three-headed birds, which utter a harsh wailing heard miles off, sending a chill down the spine of even the most foolhardy commoner and the bravest soldiers. One minor mistake on the part of the seamen, and the boat shall be carried into the rocky channels and all aboard shall be killed." "Wanli Changsha is located to the southeast of Wanli Shitang. Also known as Liushahe River to barbarian countries to the southeast, it adjoins the Ruoshui River in the south. Under the sand-carrying draught, it seems snow-capped on sunny days. Boats accidentally bumping into it tend to be inextricably entangled, and only with strong southeasterly gusts can they be saved from doom." Here Wanli Shitang refers to the Xisha Qundao while Wanli Changsha to Nansha Qundao. 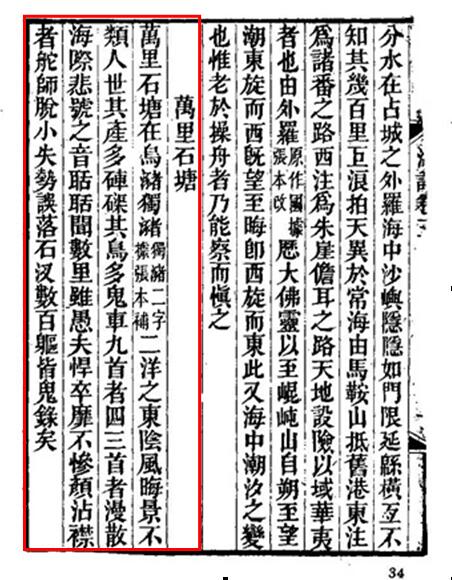