The topography of Nanhai Zhudao or Shitang in generalized term was described by Wang Dayuan the Tang-Dynasty civil navigator and geographer in his book Dao Yi Zhi Lüe. "The skeleton of Shitang originated from Chaozhou. Meandering like a serpent across the vast sea, and passing many a maritime country, it is commonly called Wanli Shitang (ten thousand-li rocky reefs). To my estimate, it is far longer than just ten thousand li! It takes more than 100 hundred days for a ship equipped with four sails to speed across the waves and reach the Western Ocean under the prevailing winds from Daiyumen (now Quanzhou, Fujian Province). If the distance covered in each twenty-four hours is 100 li, the journey totals about 10,000 li. The reason is that the geographical position is readily intelligible. In one direction, it spreads to Java. In a second one, it spreads to Borneo and Timor. In a third one, it spreads to the land of Kunlun (refers to China) region beyond the Western Ocean. The region must have been the overseas land mentioned by Zhu Zi as in connection to the Central Plains! In the vast expanse of the ocean, how can one get a clear picture of the Shitang hidden therein? Shunning it entails good luck, while confronting it means bad omen. Therefore, the compass can mean the difference between life and death. Had it not been for the resourcefulness of the boatman, how could the passenger be saved from drowning? Well, after the close escape, how can one leave his life to the gusts and waves once more? 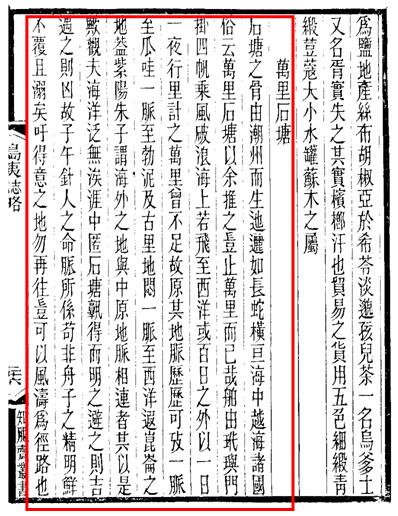