With the development of nautical technologies, ancient Chinese grew better acquainted with the South China Sea and Nanhai Zhudao. After the Song Dynasty (AD 960-1279), Nanhai Zhudao began to have relatively established names. In Wu Jing Zong Yao, a book compiled during the reign of Emperor Renzong, in the charge of Zeng Gongliang, the Edict Attendant in the Hall of Heavenly Manifestations (official post of the junior fourth rank) and Ding Du, deputy head of the Ministry of Works, it is written that "Nanhai County of Guangzhou... covers an area spreading to a vast sea 40 li to the southeast, 420 li to the east of Huizhou, 240 li to the west of Duanzhou, 750 li to Enzhou in the south, 250 li to Shaozhou in the north, 400 li to the Tunmen Hill in the Southeast over the seas. After a tract of shallow water over 20 li, there is a stretch of sea measuring 200 li over which one can travel 50 li each day. A southwestward journey of seven days under the east wind from the Tunmen Hill takes one to Jiuru Luozhou (nine islets of cowry), another three days' trip to the Bulao Mountain (original note: under the jurisdiction of Huanzhou), yet another three days to the east of the Lingshan Mountain (original note: with sweet water), which extends further southwest to Dayi, Foshizi and Tianzhu over an immeasurable distance." Textual research has confirmed that Jiuru Luozhou is now the Xisha Qundao. 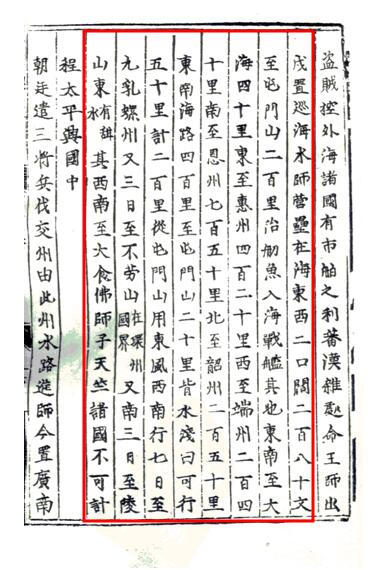